There is one folder your-GOAT-directory/app/database/data in which you can organize the data you want to load into the database. The setup script will search for shapefiles (.shp) and SQL-table (.sql) dumps in this directory. All of the data will be uploaded as custom data tables into your database. In the following table schemas for the most important custom datasets are described: 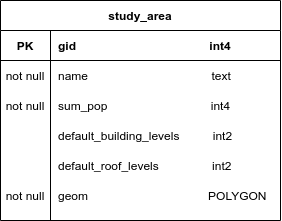 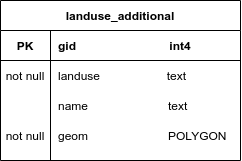 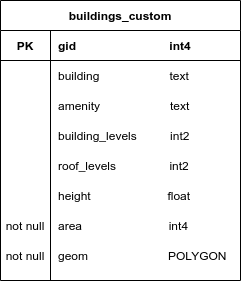 All attributes labelled as “not null” are required attributes. The remaining attributes are option but are suggested if available as they will improve the results. The described custom tables are especially used for the provision of population data. It is important to keep the described naming convention as GOAT expects the attributes to be labeled as shown. Not all tables are required to run GOAT and depending on the availability of data one or the other option to process population data is used.

Accurate population data is of special importance for GOAT. Due to the variety of available data sets different options for handling population data are provided. There are defined four options for which the configuration file your-GOAT-directory/app/config/goat_config.yaml can be adjusted:

Census Extrapolation As census data is often out of data a procedure was developed that updates outdates census grids and disaggregates population on the building access level.

Population disaggregation Population is disaggregated from the districts of the study area to the building access level considering the residential gross floor area of buildings.

For the modes “census_standard”, “census_extrapolation” and “disaggregation” buildings are classified into residential and non-residential. This is done based on a process called dasymetric mapping, which uses several filters and data such as landuse to properly label buildings. In the configuration file goat_config.yaml these filters can be adjusted. The default settings are mostly tailored to Munich therefore it is highly suggested to revise categorization if you work in another context.

Setup your own GOAT